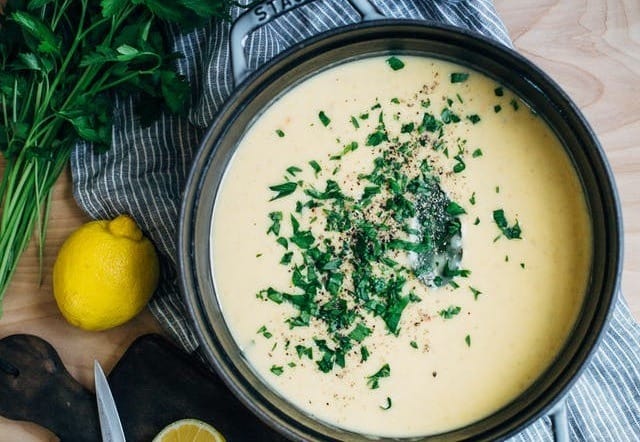 Cold weather conjures memories of my mom’s creamy potato soup, with its tiny pools of melted butter and black pepper flecks on the surface. It was rich and sating, but also simple and balanced.

That simplicity and balance was front and center as I invented my own take on my mom’s recipe. A cache of lemons on my countertop presented the chance to push the envelope. I wanted a soup that was creamy, sure, but also tangy and vivid. My potato soup is every bit as comforting as the recipe I remember, but the hint of zest and generous squeeze of lemon enliven the dish, making for a happy, almost playful soup that pops.

With such a simple list of ingredients, details matter. You’ll want to cook the onions with care, until they’re supple and almost melt into the butter. Then, give the same care to the celery and carrots.

When puréeing the soup, I like to leave a bit of texture; you can do this by either pulsing just until soup is mostly smooth or removing the potatoes with a slotted spoon, blending them with a few cups of broth, and then stirring back into the textured broth.

(Image credit: Elizabeth Stark)I MADE THIS

Stir in the potatoes and cook 2 minutes. Add the stock, lemon zest, and bay leaves. Bring to a simmer, then reduce the heat to medium-low and simmer until the potatoes are fork-tender, 20 minutes.

Remove the bay leaves. Purée the soup in a stand blender or with an immersion blender until it is just smooth but still has a bit of texture. Return to the pot. Stir in the half-and-half and then the lemon juice. Reheat over low heat until warm. Taste and season with salt or pepper as needed. Ladle into bowls and garnish with parsley if using.

link to Is Induction Cooking Safe During Pregnancy? [2023]

As a chef with many years of experience in commercial and home cooking, I know how important it is to have the right tools in the kitchen. One of the most popular and innovative tools in recent years...